The Best Car Detailers In The World
Shine My Ride by Empire Auto Detailers is founded by Damon and Natasha Gadson.
Shine My Ride by Empire Auto Detailers was founded in 2006 by Damon and Natasha Gadson. We named the company “Empire” because we both are from New York and as everyone knows it’s the Empire state. Our colors are blue and orange for a few reasons. Many of our favorite sports teams and our alma mater all use blue and orange as their colors. We are both graduates of Morgan State University plus we are both NY Knicks and NY Mets fans. With that being said orange and blue was just a natural choice. We started Empire as a “mobile only” detailing company based out of our home garage. We had one van, one employee, and a drive to be the best detail company in the world. 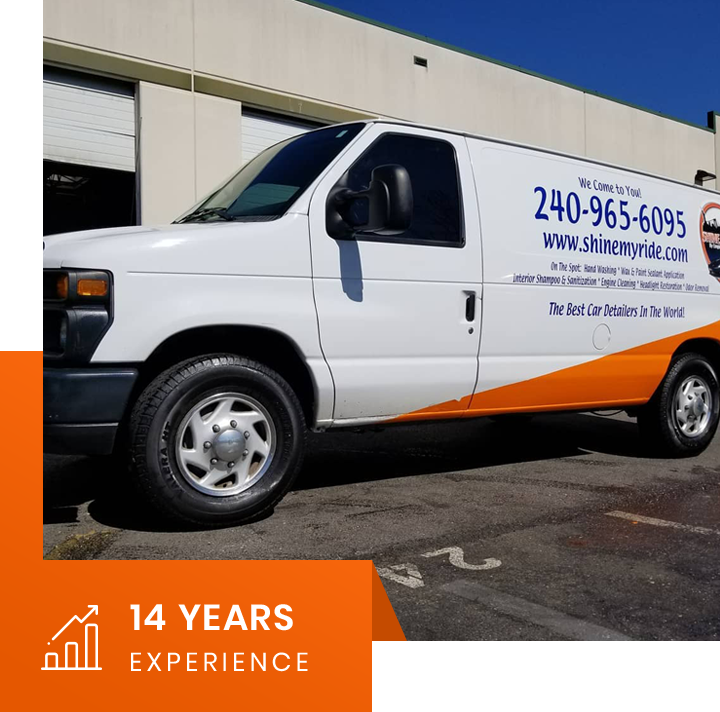 Unlike other detail companies, we specifically avoided working with car dealerships and focused our efforts on corporate accounts to build our customer base. These strategies lead us to capture accounts such as Lockheed Martin, Choice Hotels, WTOP, Kearny Company and CISCO among others. This served to be a great early move because as the US auto industry plummeted and many local dealerships closed, we thrived and continued to double our revenue year after year. During that time we added an additional van by acquiring a smaller local company that was going out of business. This additional van allowed us to continue aggressively marketing to other local companies. During the early years we worked at the Motorsports Auto Show in Harrisburg PA, Washington DC and Baltimore MD. Our great performance and ability to detail up to 100 cars in a day helped with our reputation as an up and coming company.

In December of 2009, we decided to partner with Living Social to help gain new customers during the slower winter months. During this first deal we sold 75 vouchers which for a small company like ours were perfect. When we spoke to the Living Social representative he said, “Hopefully next time we can sell 250!” At that time we laughed at that notion because 75 new customers was great for us. That following spring, we partnered with Living Social once again with the hopes we would get about 100 new customers. Much to our surprise we sold 720 packages! The influx of new customers allowed us to add a new dimension to our business model. In addition, with the extra revenue we were able to confidently look for a fixed location. In July of 2010, Empire moved out of our home and into its first location on Mid Cities Ave. in Beltsville, Md. The remaining months in 2010 presented various challenges from unexpected and new expenses to increased staff and equipment, not to mention creating new business operational processes so we can work effectively in our shop. Even with our growing pains, we were still increasing revenue and providing great service. In May of 2011, one of my career goals was achieved and we were featured in the small business section of Black Enterprise magazine. In the spring of 2011 we decided once again to partner with Living Social, this time adding our Baltimore location to the agreement. That addition allowed us to sell over 2,750 deals! To date this remains a record amount sold for an auto detail special on a daily deal site.

In 2015, we decided to strategically move to this location here on Howard Avenue with the hopes of increased visibility and a rejuvenated location will help take our company higher than we have ever been. This move goes along with how we have always operated, continually tweaking and changing Empire to better suit the needs of our customers. All of the changes are made with one goal in mind, and that is for us to be the best car detailers in the world. With all the growth and changes, we are still committed to our mission to use the industry’s best products combined with superior customer service to give our customers the best auto care experience possible, while providing the owners, investors, and employees an excellent financial reward.

Thank you for being our customer and allowing the Empire team to continually “shine your ride”.
The keys to the success for Shine My Ride by Empire Auto Detailers:

1. Exceeding the client's expectations. We love to under promise and over deliver!

2. Professional and knowledgeable team members that will gladly guide you thru the car detail process.

3. Use of the highest quality biodegradable products and professional equipment to get the job done right!